Are Electric Cars At A Higher Risk Of Catching Fire? 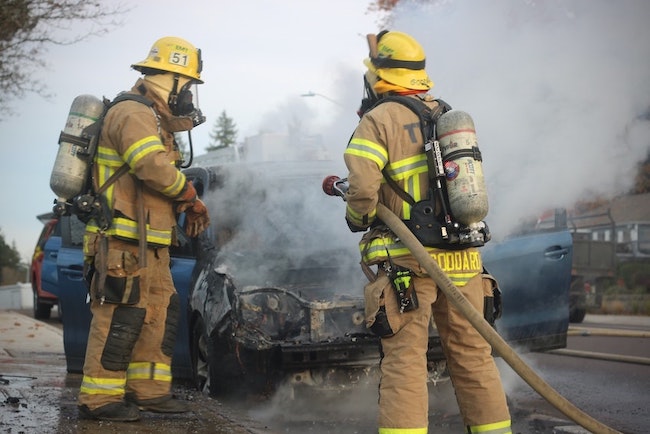 When An Electric Vehicle Catches Fire, It Makes Headlines. A Petrol Car Catching Fire Is Not As Exciting News Because It Is Commonplace!

This is understandable, as EVs are relatively new on the roads and therefore hold much more fascination for the reader. However, these headlines often understate the risk of fire for traditional petrol and diesel cars (internal combustion engine).

Tesla claims that their cars have demonstrated a safer track record. In fact, petrol cars are nearly 11 times more likely to catch fire compared to a Tesla, with only 5 fires for every billion miles travelled compared to 55 fires per billion miles for petrol cars. According to the National Fire Protection Association (NFPA), crashes are one of the key reasons for vehicle fire, with one about every three minutes on US roads.

Extinguishing a fire in a battery-electric vehicle (BEV) is generally more challenging than with petrol or diesel cars. This is because the lithium-ion battery continues to be at risk of reigniting, even after the initial fire has been extinguished.

In internal-combustion engine (ICE) cars, once the fire has been put out, the fuel is removed from the vehicle. However, this is not possible for electric cars as removing the battery is not quite as simple as emptying a fuel tank.  And since an EV battery still continues to contain energy, it can reignite the fire.

Emergency first responders, like firefighters, are less familiar with electric car incidents. Therefore, they will continue to require specialised training to deal with fire incidents involving EVs, as the number of electric cars on the road increase. Do keep in mind emergency crews have had many decades of experience in dealing with petrol and diesel fires. In time, a battery-electric vehicle (BEV) catching fire will not make as many headlines!

Is It True That A Fire In A Petrol Car Spreads Faster Than An Electric Car?

In general, a fire from a lithium-ion batteries will take longer to start and spread, compared to a petrol or diesel fire. In a number of EV crashes the driver has been able to exit carefully before the fire has spread. This is critical as every second matters following a road accident. However, more data will need to be collected, over time, to conclude comprehensively on this matter. Do keep in mind that EVs make up less than 5% of the cars on UK roads.

Are Electric Cars At Risk Of Catching Fire Without Being Involved In A Crash?

No one really knows. There have been very few incidents and limited data to make an informed conclusion. However, in April 2019, apparently a Tesla Model S caught fire while parked in a garage in Shanghai. Unlike most cases of electric vehicles on fire, the Tesla Model S in Shanghai had not been involved with an accident or collision.

In this incident, the owner of the 2015 Tesla Model S had charged the car a few hours before. Fifteen fire engines were dispatched to the scene and the fire was extinguished within an hour. Tesla responded that it was investigating the reports and would cooperate with local authorities. Elon Musk, the CEO of Tesla also tweeted that:

‘[The] Reality is a Tesla, like most electric cars, is over 500% *less* likely to catch fire than combustion engine cars, which carry massive amounts of highly flammable fuel. Why is this never mentioned?’

Is Water More Appropriate Than Foam In Putting Out An EV Fire?

Yes, surprisingly water is more appropriate for fires related to electric cars. In general, for petrol or diesel vehicles, emergency responders prefer foam or dry chemicals that are more effective in putting out such fires. However, for EVs these are not as effective.

A significant amount of water is required for battery related fires with a constant stream of water targeted directly at the battery till the fire is extinguished. In the event of a fire, do not attempt to use your garden pipe to douse the fire. You should immediately call the fire department as this requires specialised action!

So, Should I Avoid Buying an EV?

Certainly not! It is true that fires related to EVs are less understood than internal-combustion engine fires, but that does not mean that EVs are a higher risk.

As with the maturity of any technology, automotive manufacturers will find ways to further reduce the risk, as they did for petrol or diesel cars by improving the design of the fuel tank. Battery manufacturers have already made improvements in design and safety of lithium-ion batteries.